U.S Economy, The Fed and The Stock Market 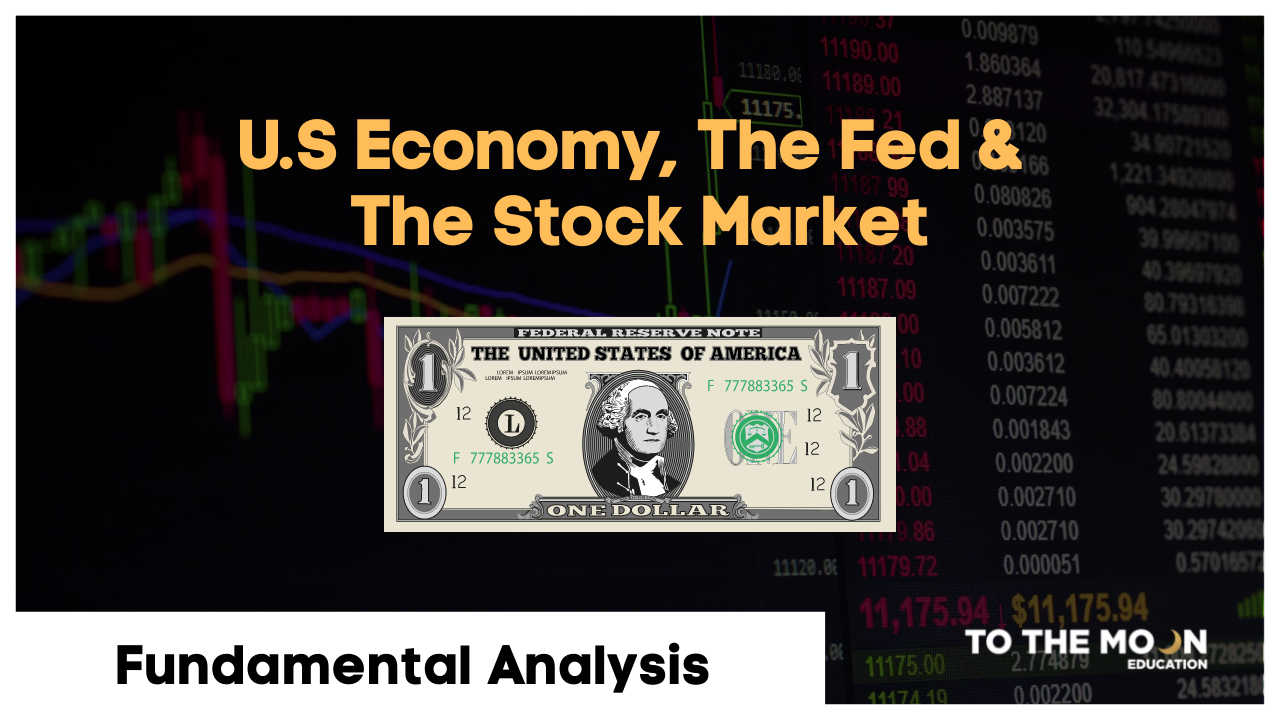 On Wednesday, we saw a very swift surge in the U.S. Dollar caused by a very unexpected announcement by the Federal Reserve. In essence, I decided to do a breakdown of the event and what we can expect in the future.

First, the expectations for this meeting were nowhere near close to what actually was delivered by the Fed. The majority of analysts, including me, were expecting to see no significant change in the current monetary policy guidelines. Thus, the outlook which was set during the COVID-19 crisis remained unchanged until this meeting.

The U.S. economy was struggling, and the labor market conditions worsened very fast after the U.S. and other major economies announced the lockdown. From a very healthy labor market and a record low unemployment rate, we went to a record-high unemployment rate and millions of jobs lost. As a result, the economy went into recession. Now don't consider the recession to be a bad thing because the definition of a recession is two-quarters of economic decline. In our case, the recession was very short-lived after we got a grip of the pandemic.

To battle this recession, the Fed lowered the rates to 0.25 basis points to provide "cheap" money to the economy and stimulate the money flow in the economy. From "cheap" money, I refer to lower interest rates on loans, thus providing cheaper leverage to all businesses. That policy did its purpose but never really helped the economy as a whole. So despite all measures, the outlook remained unchanged and pointed towards a slow and steady recovery, though the outlook changed significantly at this meeting. Let's take a look at the table below. 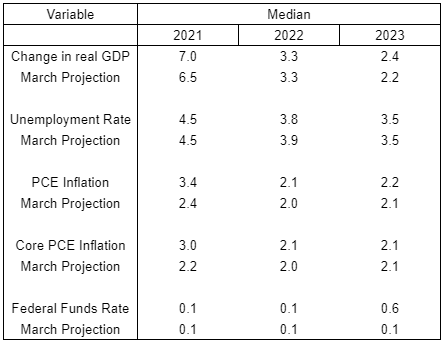 The two major points from the outlook that leads to the surge are the rise in interest rates and the improving outlook for inflation.

As we can see from the table, nearly all projections for 2021, 2022, and 2023 remain unchanged except for two things - inflation and the interest rate. Last month the CPI inflation spiked to 3.8% y/y, which beat the expectations by 0.4%, leading to a surge in the dollar. Until this meeting, we didn't know if that's just a short-term spike or a sustainable increase in inflation. In line with the Fed economic projections, we see that the core inflation rate will increase in 2021 and gradually decrease in 2022 and 2023. As we can see from the chart below, after both recessions in 2000 and 2008, we're way above the levels before the recessions and way above the levels after the economic recovery. 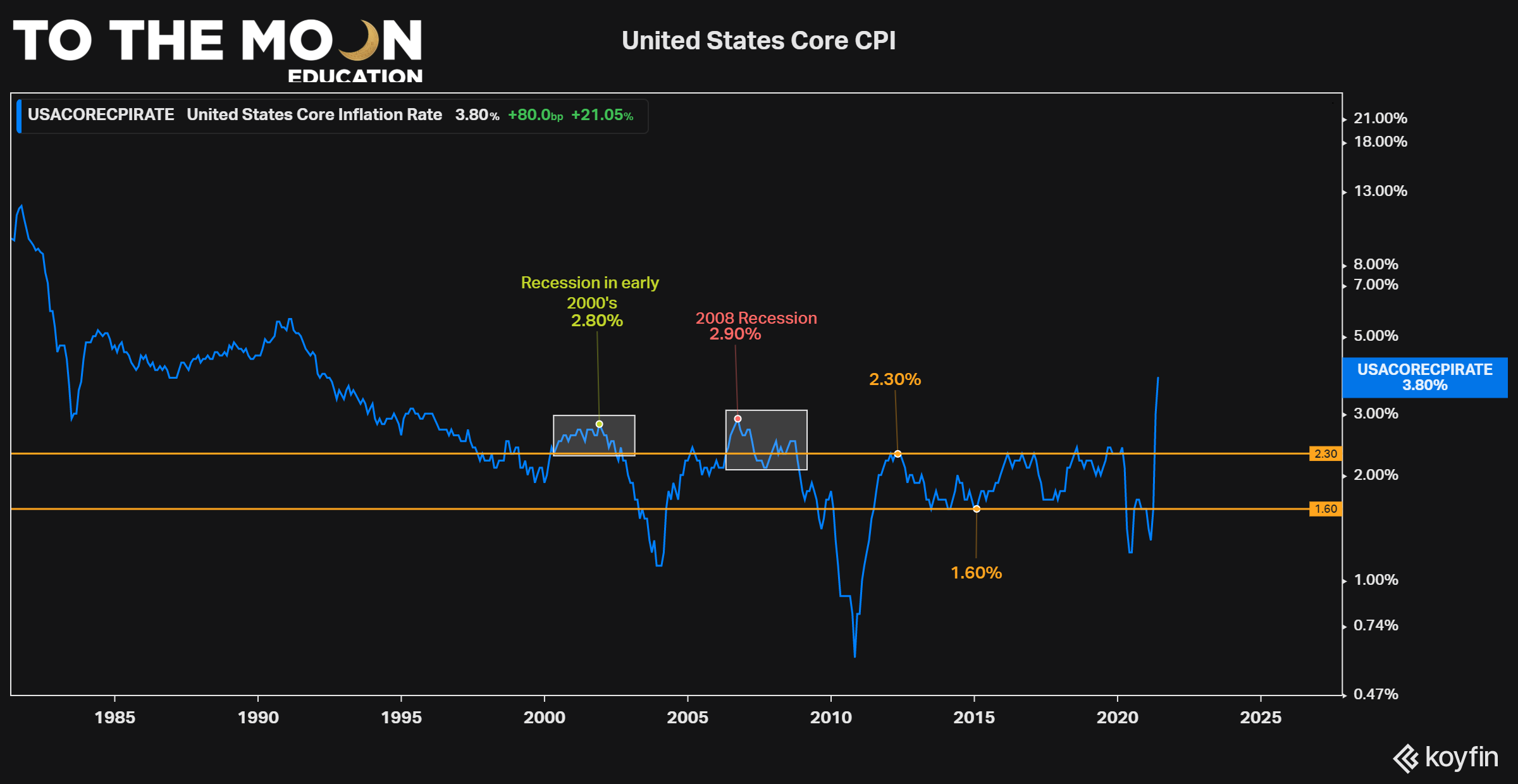 Even if we don’t keep up at these levels, if it remains at the projected levels between 2.0-2.3% it is more than good to consider it positive. As you can see between 2012 and 2020, the core CPI remained in the range between 1.6-2.3%, which would leave us in the upper band of the range.

The second and, for me, the most significant release is the interest rate. This was actually the data that caused the spike in the U.S. dollar. At this meeting, the Fed announced the start of a possible rate hike in 2023. What does a rate hike mean exactly? Well, let's take a look at the chart first. 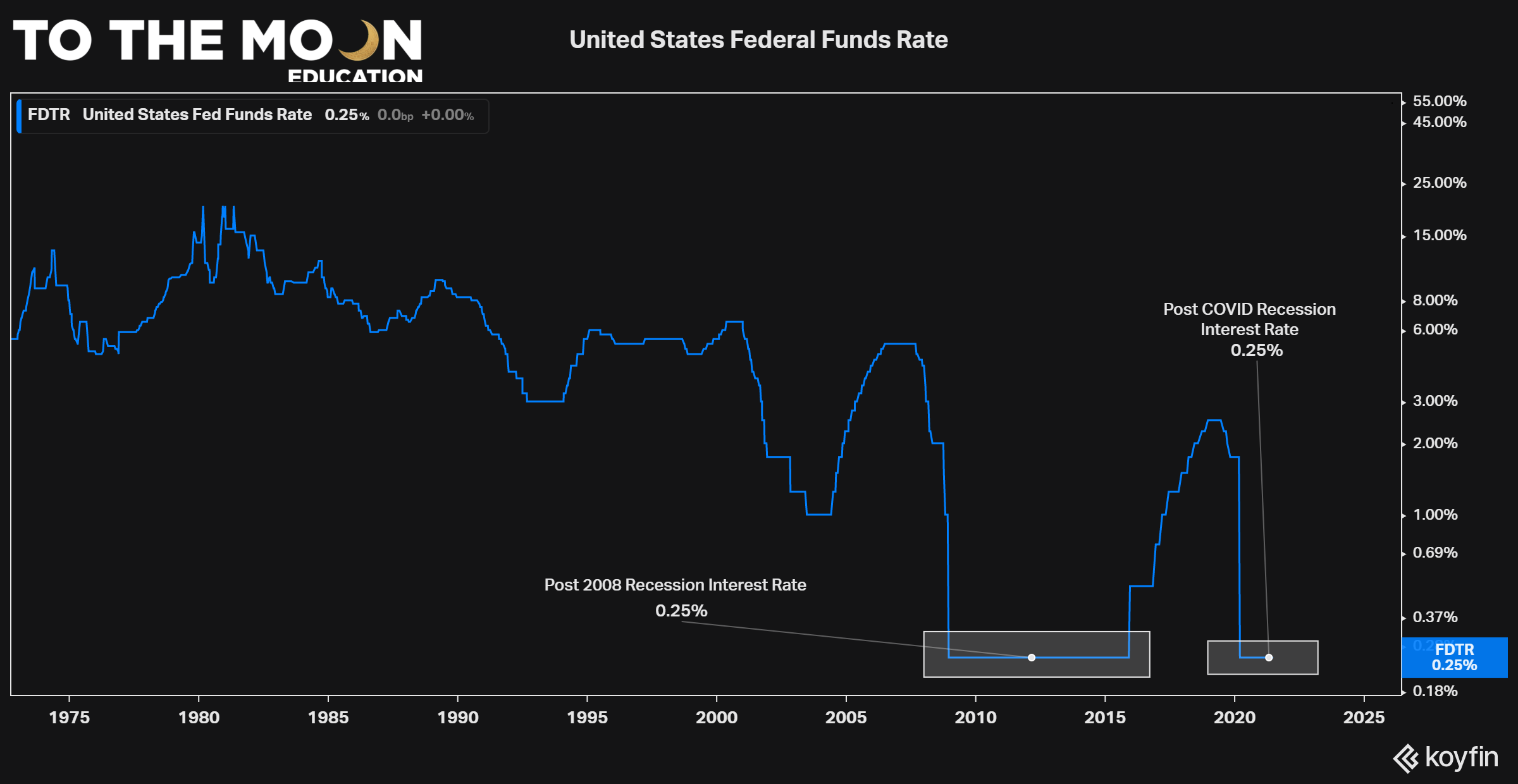 As we can see, after a recession, we have a period of low interest rates, which are used to stimulate the contracting economy. After that period, there's a sudden rise in interest rates (rate hike), indicating an economic recovery. So the announcement made by the Fed for a rate hike means we're on the way to economic recovery after the COVID-19 recession.

While this sounds good for the U.S economy, it looks completely the opposite for the stock market. The current interest rate did work in favor of the companies because of the low-interest rate loans. Those loans provided cheaper leverage and a more significant increase in earnings, thus pumping the stock market even further. On the technical side provided by our sensei Bayaan, we forecast a crash in the stock market. With this announcement by the Fed, on the fundamental side, I'm expecting the same outcome. When and more like "If" they start the rate hike, companies will no longer have access to "cheap" loans, thus lowering their leverage to boost earnings. This will lead to lower earnings and a significant drop in most stocks. Since stocks are part of the indexes (e.g., S&P500, NASDAQ, Dow Jones Industrial Average), it would also affect indexes' prices. Not all companies will indeed crash and decline, but many will suffer from that rate hike. Keep in mind that from the crash, it does not mean that all stocks or indexes will crash 100%, but on the index side, even 15% is enough with enough leverage.

With that said, we covered everything needed in this article. We don't know when exactly it will crash. It could be today, tomorrow, or a year later, but the important thing is that we should not remain blind to what the market data and technical analysis show us. Many people remain blind to this stock market pump and go "all in" at these pretty high prices of stocks and will most likely suffer great losses. Keep your mind sharp and clear, and don't let greed cloud your judgment.

Thank you for the time invested reading this, and I hope you have a blessed, peaceful, and productive day!

Stay connected with news and updates!

Join our mailing list to receive the latest news and updates from our team.Don't worry, your information will not be shared.

We hate SPAM. We will never sell your information, for any reason.

Every time we have a new blog post, you'll be the first to know :)

We hate SPAM. We will never sell your information, for any reason.